Our external wall cladding solutions offer protection and a strong aesthetic finish to your building’s exterior. Our designs not only look great, they also do the job of keeping your structure secure very well indeed. Wall cladding has to be able to stand up to the elements and keep out wind, rain and anything else that’s thrown at it. Our ventilated Rainscreen System does exactly that. You can find out more about it and its benefits below. 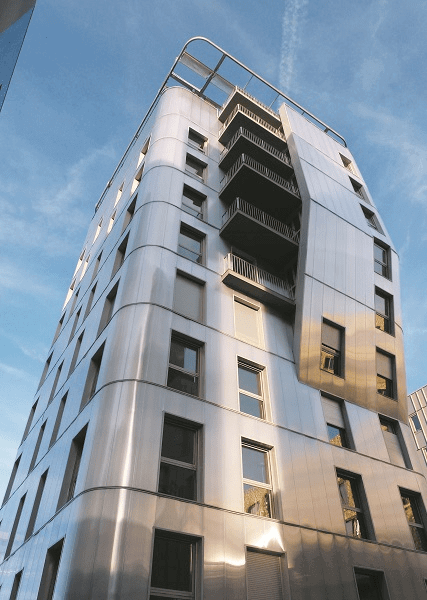 The Ventilated Rainscreen System we use is a complete system that incorporates Danpalon panels that help to protect and secure the building structure’s insulation. Because of an air gap, there is a convective motion behind the panels that keeps the insulation dry and efficient. So, with the aid of the Ventilated Rainscreen System, your building and its insulation can become even more environmentally friendly. The choice of designs and colours on offer mean that you can find a solution that looks great too.

Insulation protection is the most important thing offered by our external wall cladding. When your insulation is kept protected, it remains free to do its job properly and keep your building as secure as it needs to be. There will be no wasted energy anymore. That’s something that is often the case with buildings that don’t have the right protection for their insulation. Don’t let this become a problem for your building because it doesn’t need to happen. Wasted energy means wasted money, and no one wants to be wasting money unnecessarily.

Cladding always needs to offer protection from the elements, and the most problematic of these is the rain. If your building is fitted out with cladding that is not 100% watertight, you will run into problems before. Luckily, we offer external wall cladding solutions that are completely and perfectly watertight, meaning that leaks or even flooding will never have to concern you as you manage your building. This is allowed by the exclusive double notching of our Ventilated Rainscreen System wall panels. They’re designed to keep water out at all times.

Simple installation is another thing that’s really important. The necessary connections are made directly onto the support. What this means is that there is never any need for extra supporting structures to be put in place when the external wall cladding is being installed. To put it simply, it makes the installation faster than any of the other wall cladding solutions you will find out there on the market at the moment. Before you know it, the job will be done, and the external wall cladding will be in place.

For the last 50 years, we’ve been creating and installing innovative roofing systems and solutions for various architectural creations. Our company is the creator of roofing systems that offer optimal thermal and solar comfort. Today, we design, manufacture and distribute roofing solutions, such as skylights, roofs, facades and more, for a variety of applications.

At Danpal, we are focused on providing products that meet all of the building regulations that you may be faced with, giving you products that perform higher than industry standards and are also visually appealing. While this may seem like a lofty goal, our track record speaks for itself.

One of the most popular products we have in our range is the ventilated rain screen system of wall cladding. This meets all of the necessary regulations you need to meet when ensuring that the insulation levels are in line with standards and other regulations. 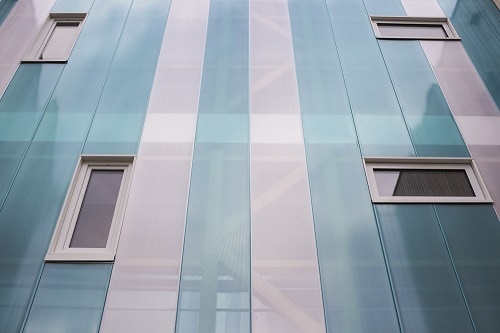 Our light but solid wall cladding is achieved thanks to it being connector bound and being made up of the best in microcell polycarbonate panels. It has been shown that this configuration is three times lighter than those other options on the market today.

As these connections are made while having the system on the support, they are very easy and quick to install. There does not need to be any additional framed structures needed when installing them. This saves time, energy and money. What architect doesn’t like hearing that phrase?

Our perfect level of water tightness has been achieved thanks to the double notching of our Cladding panels. This means that even in the worst conditions the permeability of the panels will not be compromised.

One of the main draws to this product is that the system is universal, no matter what sort of structure is in question. We have seen this system used on all types of buildings across the world, from skyscrapers, stadium, centres of excellence, galleries, and so on. This is thanks to the way the system easily connects with the structure.

Another great aspect of the VRS system is the availability of a wide variety of hues and options that make the design options endless. As an architect, you will be in love with the many tweaks or changes you can make with your wall cladding thanks to these options.

There are many different shades to choose from. If you want a sparkling effect, opaque, bright, Bicolour, matt or shiny, the options are many. Your building can be enveloped in the type of light and reflections that you have laid out in your mind’s eye and the plans in front of you with little to no heartache.

Our ventilated rainscreen cladding system allows you to achieve an appealing looking exterior to your structure while still achieving some great performance benefits.

In this day and age, there are a lot of regulations that need to be met for new and existing structures. This could be related to the environmental aspects to a building or just your standard building requirements. 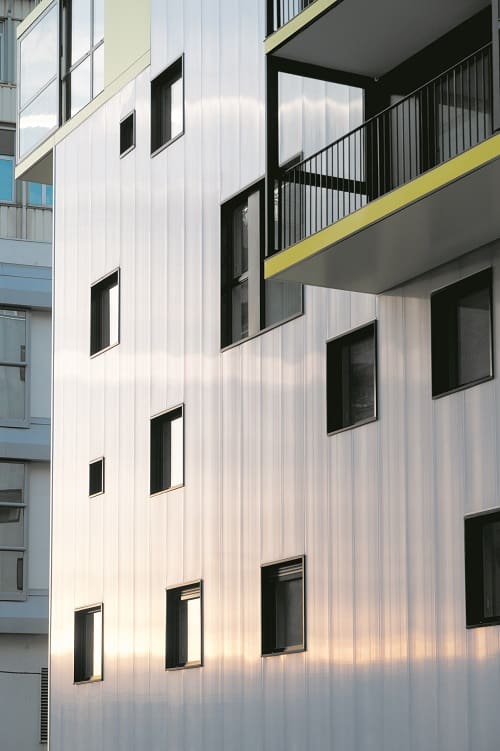 This is why it is much easier utilizing an integrated system that combines all of your needs into one thing, rather than trying to piece different aspects of regulations together from multiple sources.

These days it has been shown that approximately 40% of the energy consumption that is primarily consumed in developed countries is from buildings. This means that there is a requirement for buildings to do everything they can to minimize the negative outputs they have on the environment.

The key way in which this can be achieved through rainscreen cladding is by utilizing a system that has a high level of thermal insulation, like our VRS system.

Our rainscreen cladding is based on a process of natural ventilation thanks to an air gap that is designed into our VRS system. This allows there to be a constant connective motion permeating behind the panels. This allows the insulation to stay dry and keep its performance benefits at an optimal level long into the future.

This is thanks to the Danpalon panel that is being used. This system is also nice and lightweight, so you will have no trouble having it installed. Having said this, it is still extremely solid and has a high impact on resistance as it is made up of polycarbonate panels which are bound by connector made out of microcell technology.

This is why we can prove our system is three times lighter than rainscreen cladding without compromising on any of the performance aspects of the system.

As the system does not need any form of additional framing structures when installing it, you can save a lot of time, energy and costs by making the connections directly on the support.

If you are concerned about adverse weather conditions negatively affecting your structure’s integrity, thanks to the double notching found in our VRS panels, there is going to be a perfect level of water tightness in the structure.

Finally, the icing on the cake is all of the different creative features you can add into the system to make it as visually appealing as you like, depending on your tastes and preferences.

In the past, there were a lot of shoddily constructed buildings erected that used poor materials. A lot of the times these materials were sub optimal for the type of structure they were being used on or the region in which it was situated. This would lead to a host of problems down the line, such as dampness, loss of heat, structural stresses and even collapse in extreme cases.

The ability to retrofit certain facade systems has been seen as somewhat of a game changer, as they can be a measure taken which will extend the longevity of a structure before major work has to be completed on it. Danpal has a number of top quality facade systems that are flexible enough that they can be used in this way.

Energy performance is a massive thing these days, both in terms of helping the environment and having people being able to save on their energy costs. If you have one of these poorly built homes or buildings, the heat will be sucked out of the walls and you will have to use tons of expensive heating to get the building somewhat warm. 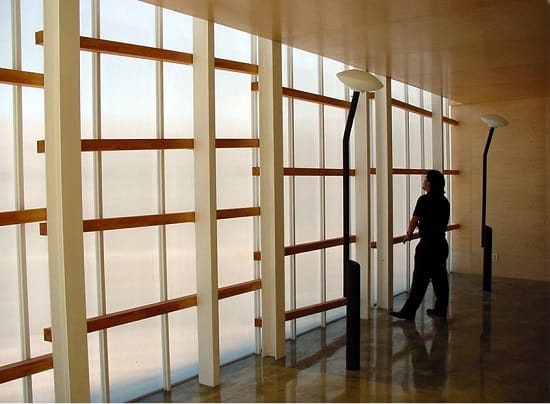 By having a proper facade system in place, you can benefit from their natural thermal effect, which will create a layer of protection around the structure. This means that cold air will not be able to permeate internally, while internal heating or air conditioning will be able to be retained in an optimal manner inside of the structure. You are getting the best of both worlds.

These retrofit systems will work better in cooler climates than warmer ones, as there are more benefits to be reaped. If you are concerned with the state of one of your structures, this could very well be the most cost effective and efficient route for you.

The more advanced building facades will have to consider significant deflections and concentrated forces. By knowing and being aware of these structural behaviours, you can better aid the design of the structure as a whole. This also allows you to choose a facade system that is optimal for the case at hand.

By intertwining all of the different variables and factors, you will be able to have an end product that will be aesthetically pleasing while yield results that are efficient and coordinated with one another.